The new Siege AA lantern from Streamlight has the incredible and terrific ability to float when it is put on water. It has several brightness levels for prime versatility, including a high setting of 200 lumens that has a burn time of 7h; a medium setting of 100 lumens and a burn rate of 15.5h; and a low setting of 50 lumens and a burn time of 37h. The Siege lantern also has a very unique red light mode provided by two red-colored LEDs that is called red LED high, which is also referred to as night vision preserving mode; this setting is there for the purpose of emergencies and readiness for potential crises or dangerous scenarios. This setting is .7 lumens and it has a run rate of 192h, or eight days. The Streamlight Siege lantern also has a wonderful feature in its S.O.S. level, that can be utilized for signaling in emergency situations such as when you want to signalize Morse Code. This S.O.S. level is .7 lumens in output and has a run time of 288h, or 12 days. This lantern is constructed of hard polycarbonate thermoplastic that is robust, and is meant to aid you with whatever heavy-duty work in which you may be involved. This polycarbonate thermoplastic also has elastomer rubber on its mold in order for it to securely grip surfaces that are slick or rough. 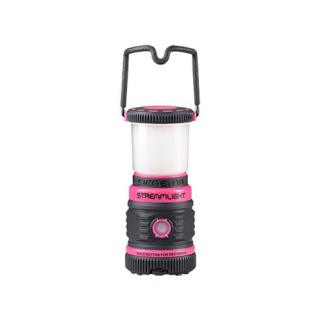